Under One Roof – CEFTA as the third Pillar of the EEA 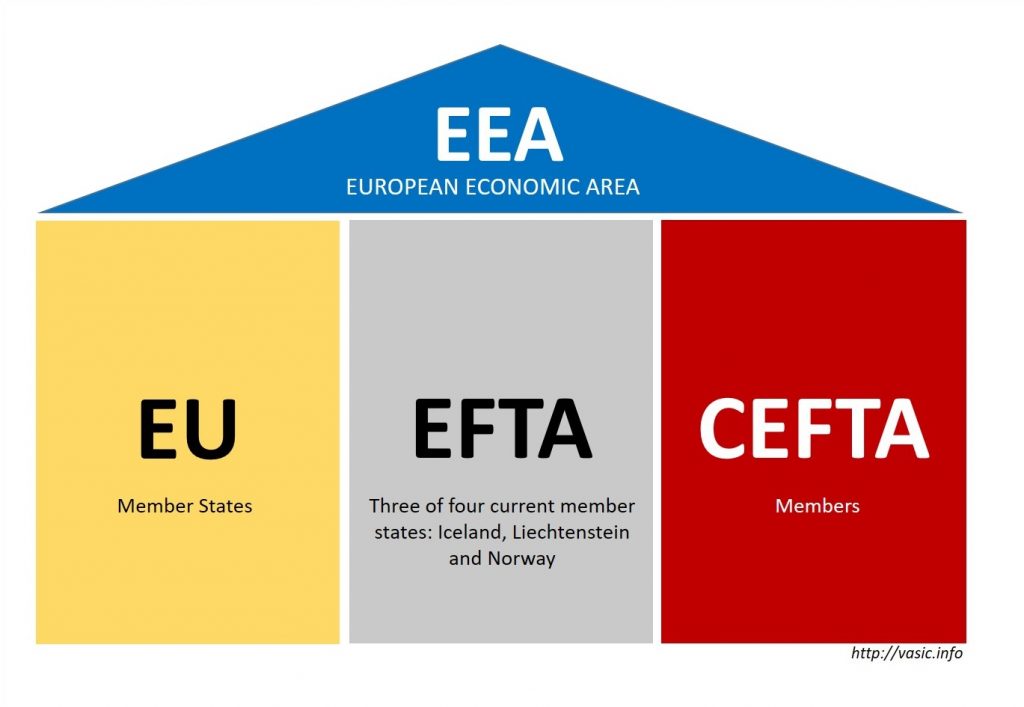 For the countries of the Western Balkans, as well as other Eastern European countries that aspire to membership in the European Union, Moldova, Ukraine, and Georgia before all, the accession process takes an extremely long time and the deadline or date of their full integration is uncertain. At this pace, the accession process might last five, six, or even more decades. At the same time, one forgets the fact that all these countries have gone through or are still going through a painful and difficult transition process, and that the adjustment process in many segments cannot realistically take place faster. Conditions and criteria are often changed without any reason, and the bar is raised to such an extent that at least four of the existing members of the EU (European Union) would not be able to fulfill the same requirements at this moment. In addition, certain demands that are put before individual candidate countries directly encroach on their sovereignty and territorial integrity and as such can never be accepted. On the European continent, the only certain thing is that the status quo cannot and must not be tolerated and that it is high time for Europe to jointly take the future into its own hands.

Membership in the EEA for countries and territories that are not members of the EU, but that have aspirations or are already at some stage of the accession process, would imply membership in the single European market. It would include most of the same provisions and obligations as EU membership, including four freedoms: freedom of movement of goods, services, people, and capital across borders, including the freedom to choose residence in any country within this area. For CEFTA members, membership in the EEA would imply cooperation in many other areas such as:

EEA membership does not include:

In addition, EEA members that are not EU members, which in this case would be all CEFTA members in addition to the three EFTA member states, are not subject to the jurisdiction of the Court of Justice of the European Union.

Membership in the EEA guarantees equal rights and obligations within the internal market for citizens and business entities. This would enable a continuous and balanced strengthening of trade and economic relation between all members. The financial contributions of EEA members that are not EU members are equal to the amount corresponding to the relative size of their GDP compared to the GDP of the entire EEA (proportionality factor).

According to the existing agreement, which would also apply to CEFTA members, all EEA members are obliged to respect EU laws (especially regarding the aforementioned four freedoms). Non-EU EEA members are required, and have an obligation, to incorporate into their domestic legislation most EU laws relating to the single market. This legislation should be incorporated even though non-EU EEA members have little influence on its adoption, except in a consultative role, as they cannot participate in the formal decision-making process, but can participate in working groups and consult on legislative solutions. Therefore, they participate without the right to vote. And yet, the experience of the EFTA-EEA member states is that the economic benefits of membership in the single market are positive and go beyond the fact that they are not the makers but the takers of decisions. This relationship is often called “fax democracy”, where the members do not participate in the adoption of laws/decisions but are sent to them by fax. And yet, there are cases in which exemptions or non-application of EU law is allowed for the EFTA member states based on the so-called safeguard measures (e.g. Liechtenstein is allowed not to apply the rules regarding the freedom of movement of people to be able to preserve their national identity, due to an extremely small population of only 40 thousand inhabitants; or Norway regarding agricultural policies, which would be in an unequal competitive situation due to climatic and other specificities position towards other member states; etc.).

By joining CEFTA, countries in the east of the European continent would become members of the EEA as well, with the procedures that other CEFTA members would go through in that process. Membership in CEFTA would be open to Ukraine and Georgia immediately. It also might be open to Turkey too, but also to Armenia and Azerbaijan, which should ensure lasting and long-term peace and economic prosperity on the European continent.

Unlike the EU accession process, this process could be completed within five years, for the current CETFA members, or within ten years, for those countries that should join CETFA first.